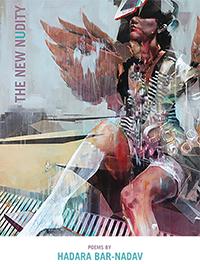 The New Nudity gives voice to the souls of objects. In these dark, spoken still lives, personification becomes a kind of conjuring, a mystical art rife with nuance. A swan is “death dressed/in snow.” A door admits, “If you look under my skirt, you’ll see/the darkness of another world.” The spine is a “bone ruffle.” Bar-Nadav’s powers of description are prodigious and spooky. In images as disquieting and reverberant as ancient riddles, Bar-Nadav marries the monstrous and the illuminating, the solid and the ethereal, reflecting harrowing and beautiful facets of our dissolving world.

Hadara Bar-Nadav studies everyday objects and builds figurative assemblages that are unbearably beautiful and believable. Like a contemporary Francis Ponge (“The Voice of Things”), she presents a tour de force on materiality—door, ladder, sugar, swan, oven, bridge, and lung, for a sampling. Using the poetic sleight-of-hand of harrowingly brief lines, she exponentially explodes the simplest object into myth and history. Her stripped down images—is this the new nudity she refers to?—create uncommonly explosive, intense poems. 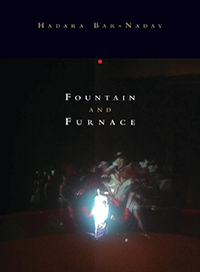 Buy it from Amazon | SPD

“The hyper-focused intimacy of the exquisite poems in Fountain and Furnace shapeshift and plumb beautifully deep. The simple objects of Bar-Nadav’s titles become layered with vivid shadows and sad strangeness.… exactness charges the invisible—the marvelous strata underneath the outward—with fierceness and loss and sensuality.”

— Alex Lemon, author of The Wish Book and Happy: A Memoir

“A bracing pruning of form down to its minimalist essence, a sharp knife trimming away dead branches. The point of view is always shifting, sometimes speaking as the object, sometimes to the object, and sometimes transubstantiating, perhaps to something like the voice of a god.”

— Peter Stitt, author of The Perfect Life and judge for the Sunken Garden Poetry Award

Buy it from Amazon | SPD | UPNE

Dazzling, sorrowful, part elegy, part call and response between Bar-Nadav and Emily Dickinson, (“We…walked into the world across a woman’s lips”), this grand third book is a scrupulously crafted, brilliantly conceived sequence of poems. An essential and ravishing work.
—Lynn Emanuel

In four sequences of sonically brilliant poems, Bar-Nadav meditates on the mortality of parents, the betrayal of the flesh, our partial salvation through artistic creation, and the many ways the dead and passing continue to live on in our perceptions of the world. Emily Dickinson’s voids and echo chambers inhabit this book—phrases from her poems are strung like silver threads through it—but these musically astonishing, restless, often terrifying poems are entirely Bar-Nadav’s. “To be alive is to be Haunted; to be dead is to haunt,” she writes. “Who calls your name? We do. Who speaks from your mouth? We do. Father, mother, daughter, we do. A seat for you at our table.” This is an invigorating, deeply moving book by one of the truly memorable poets of my generation.
—Kevin Prufer

In Hadara Bar-Nadav’s poetry, ruin gives birth to blossoms, and broken glass gives rise to temples of a thousand shining windows. In the presence of death, under the aegis of catastrophe, everything comes alive. This is not merely the art of affirmation; this is the poetry of fierce abandonment to Being. In The Frame Called Ruin, our souls are shown, thank God, to be both weightless and indestructible: “Everything unbuttons and we/forget about war.” Bar-Nadav has made a book of miracles.
—Donald Revell

A Glass of Milk to Kiss Goodnight

With a scrupulous and often terrifying sensuousness that invokes butchery and witchery, and with smooth and feverish music, Hadara Bar-Nadav creates a world of surreal excitement. “Every voice, a hiss/ with my name inside// and God in the rafters / hissing too.” Enter here, but walk with care.
—Alicia Ostriker